In this article I demonstrate how to install OpenCV for C++ from source using cmake. Following this I show how to configure my favorite code editor, Visual Studio Code (VS Code), along with the awesome Microsoft extensions CMake Tools and C/C++ IntelliSense which provides a fantastic, productivity boosting, development environment.

In order to utilize the popular Mac OS clang compiler you should have XCode and the XCode tools installed. Since installing XCode is covered quite well by Apple Developer Support and a very common task among technologists utilizing Mac OS platforms I will simple link to Apple's docs for that part.

Homebrew, aka brew, is a software package manager for the Mac OS platform that is heavily used among developers. To install Homebrew execute this command from your terminal.

CMake is a cross platform build tool popular among native C/C++ developers. I use CMake in this tutorial to build and install OpenCV for C++ as well as run the demo project. CMake can be easily installed using brew as follows.

Installing OpenCV from Source with CMake

Before I can build and install OpenCV I must clone its source repo from GitHub. In addition to the main source I will pull down the extra contribution modules for install as well. The extra modules are optional and contain experimental algorithms and features but in my opinion they are good to have for development purposes.

First make a top level opencv directory, change directories into it and clone the two repositories then checkout the most recent tagged release versions which are 4.2.0 as of the date of writing this article.

I should now be in the top level opencv directory that contains the two aforementioned repositories. Next I create two more directories (i) an install directory which will be the target for my installation of OpenCV and, (ii) another named build_opencv for building the sources in.

Next I change directories into the build_opencv directory and configure CMake as shown below.

The last steps to install is to kick off the multithreaded build to compile the project followed by installing it into the install directory as seen below.

Before moving on to the VS Code setup its a good idea to verify that OpenCV was properly built and installed using a simple demo project. To do this I change directories back to the top level opencv directory I created at the start of this tutorial (ie, the one that contains the directories opencv, opencv_contrib, build_opencv and install directories). Then I make a new directory called simple_demo and change directories into it.

Inside the simple_demo directory I make a main.cpp file and fill it with the following code which includes the opencv.hpp and highgui.hpp headers as well as defines a main() method. The main method looks for a argument to be passed to the program representing the path to a image file to be read in and displayed using OpenCV.

Additionally, inside the simple_demo directory I create a CMakeLists.txt file, which is essentially a CMake configuration script, and place the following in it.

Now I create a build directory within the simple_demo directory containing the CMakeLists.txt and main.cpp files then configure and build the demo project as shown below.

And finally, I execute the program passing it a path to an image file, the TCI logo in this example, and watch the HighGUI window display the image. 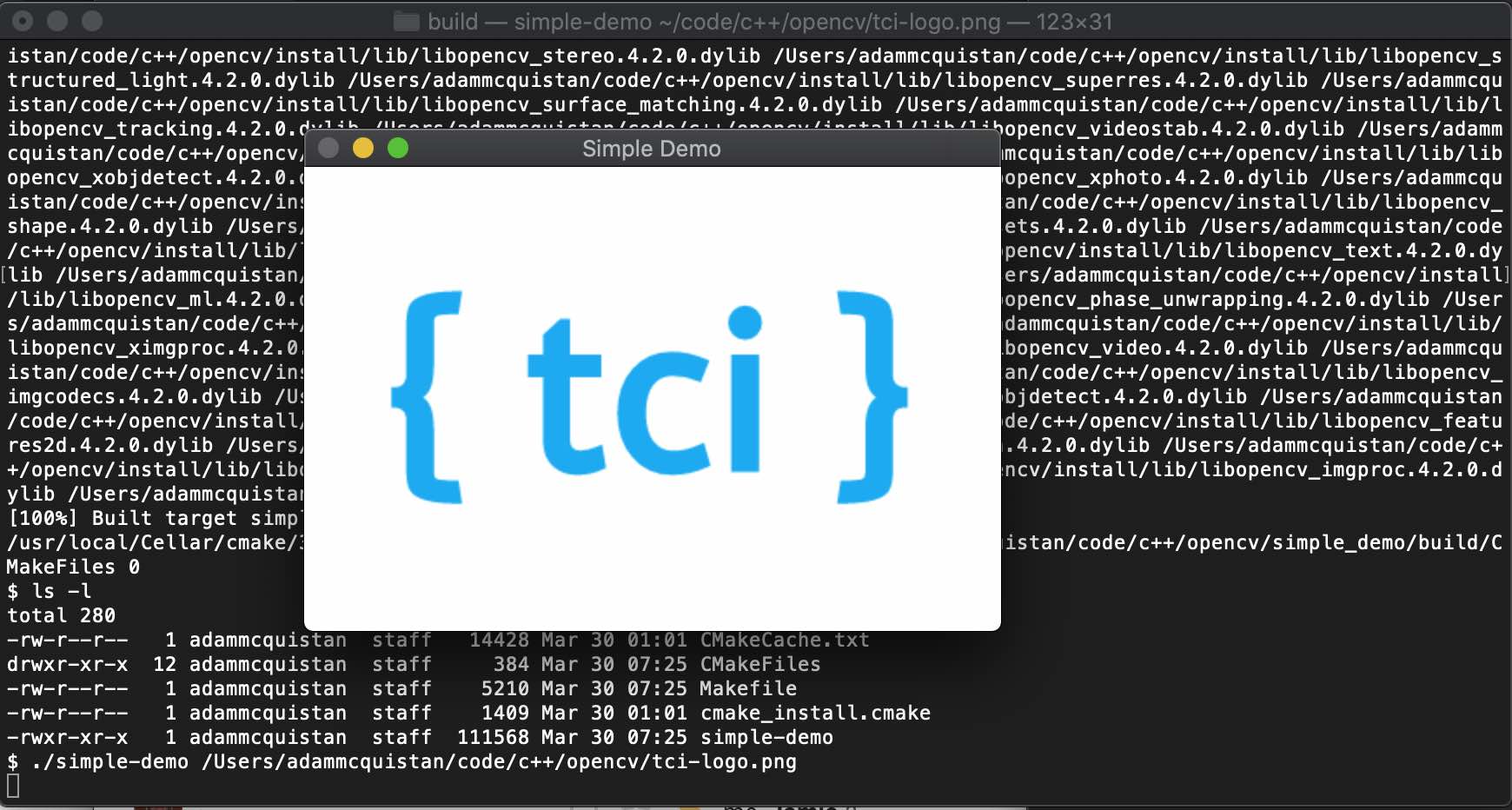 Before moving on I delete all the contents inside the build directory because I will use the CMake Tools extension in VS Code to regenerate its contents.

If you don't already have Microsoft's VS Code editor installed please do so from here. I really love using VS Code and I'm confident you will enjoy using it too in just about any language.

First off I open the editor in the simple_demo directory as shown below. Next I click on the Extensions Tab, expand the recommended submenu (or search for using the search bar) and install C/C++ IntelliSense as well as CMake Tools by Microsoft. 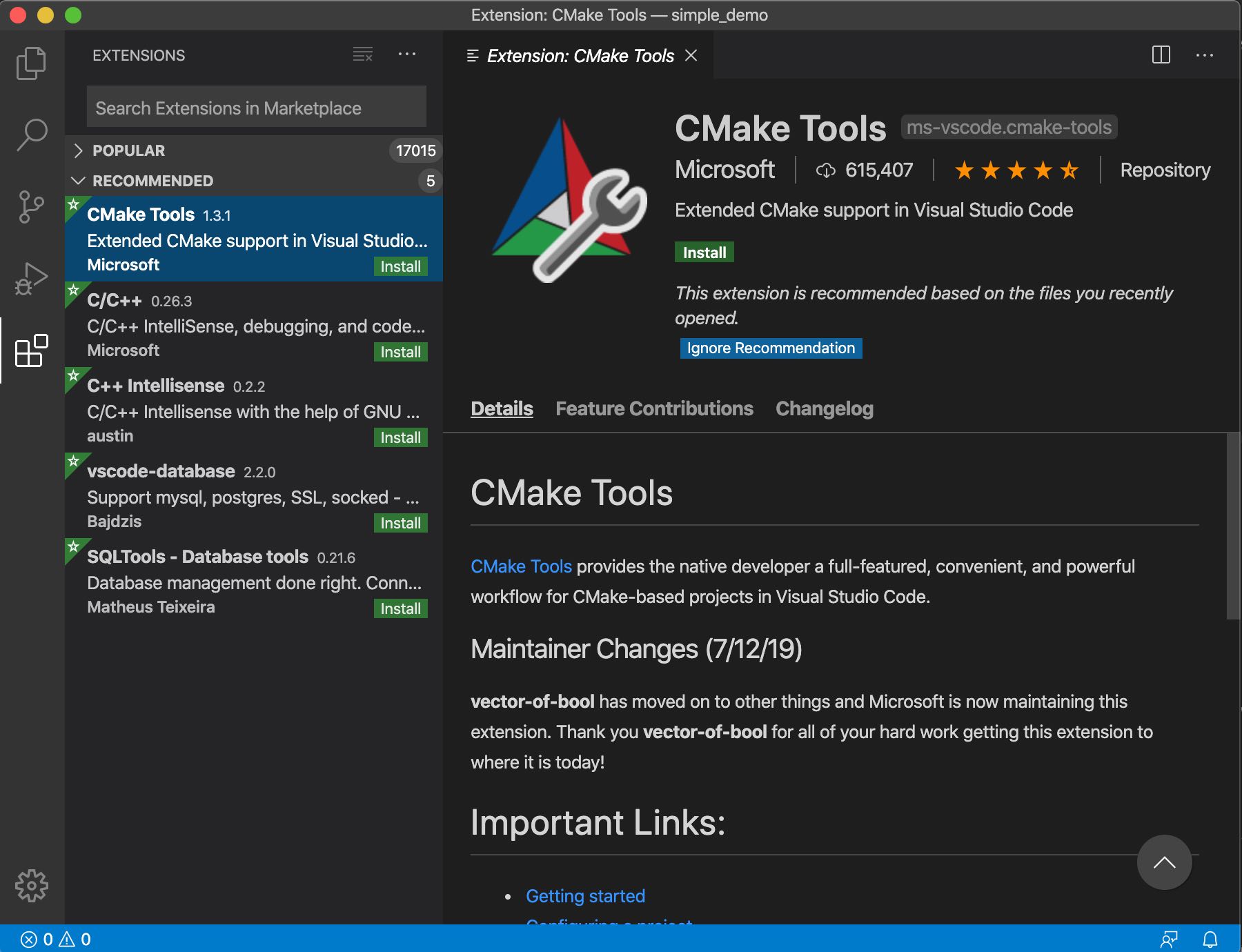 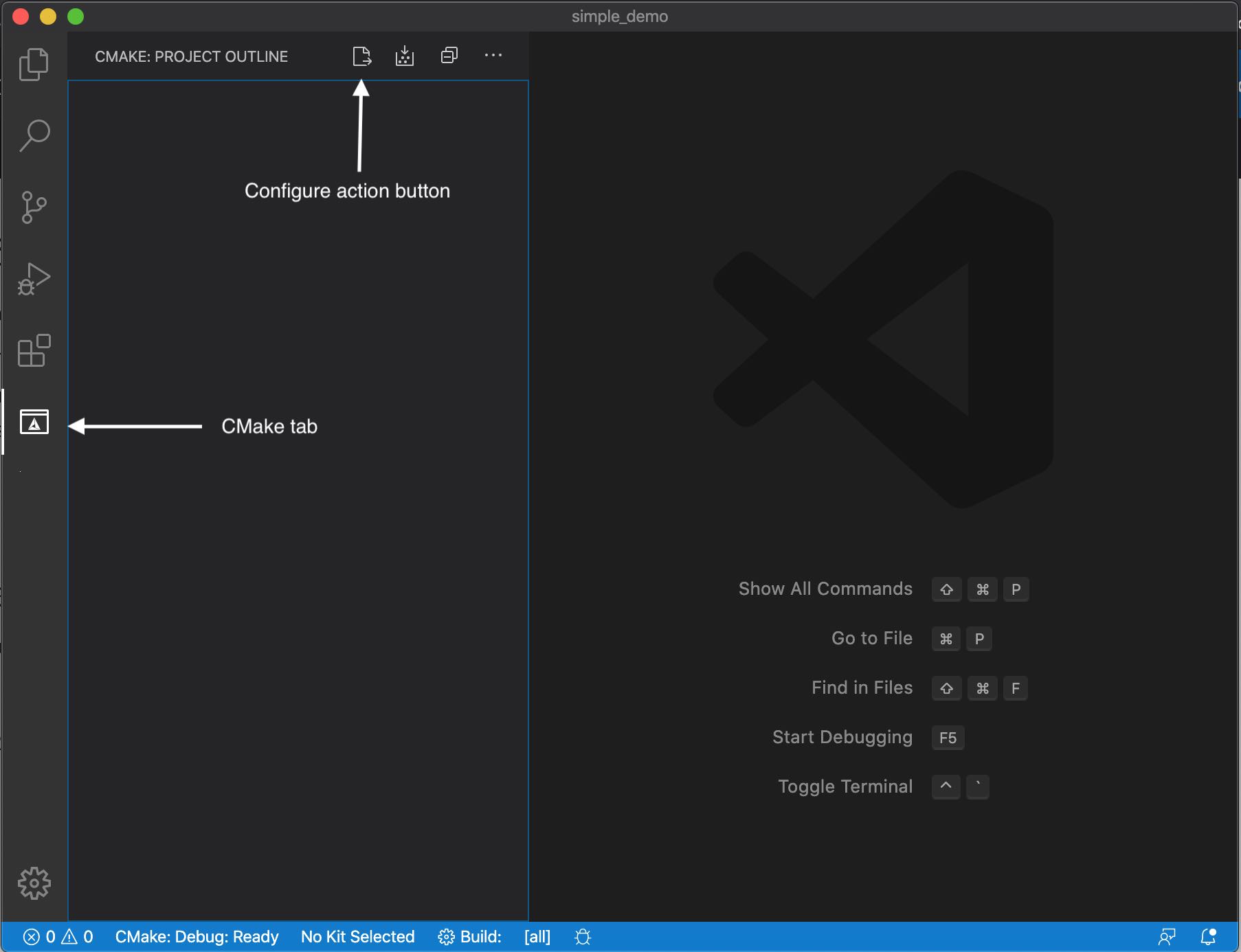 The command menu will open with a dropdown and I select the Clang compiler. 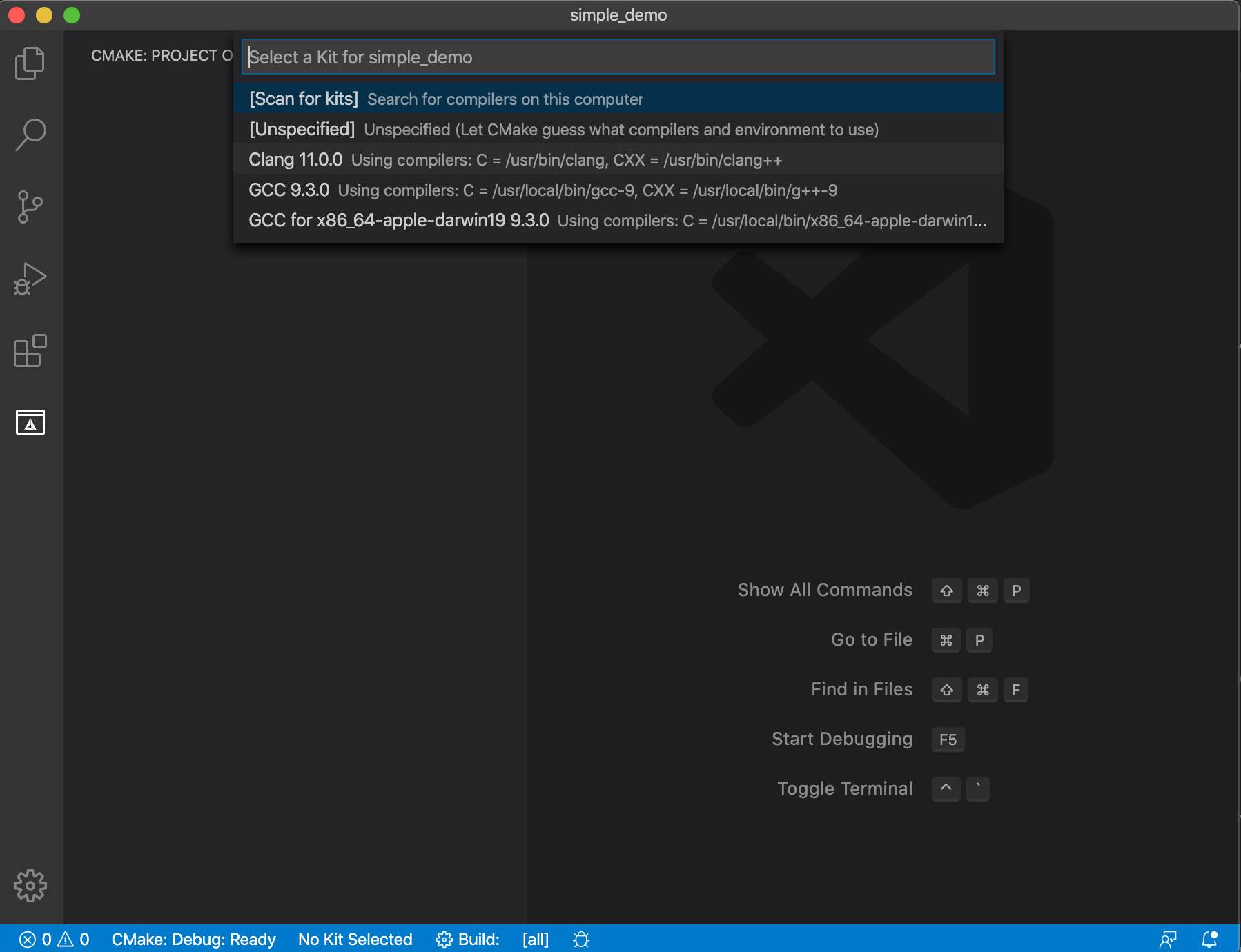 This will result in a list of build targets being displayed in the CMake tab.

Shortly after this VS Code will prompt you to ask if CMake Tools can configure IntelliSense for the project. Click Allow.

If for some reason this prompt does not appear or you accidientially close it then create a directory named .vscode directly under the simple_demo directory (it may already exist) and create a settings.json file within it and place the following in it.

Back in the CMake Tools tab I click the build action button next to the simple-demo target to build it. 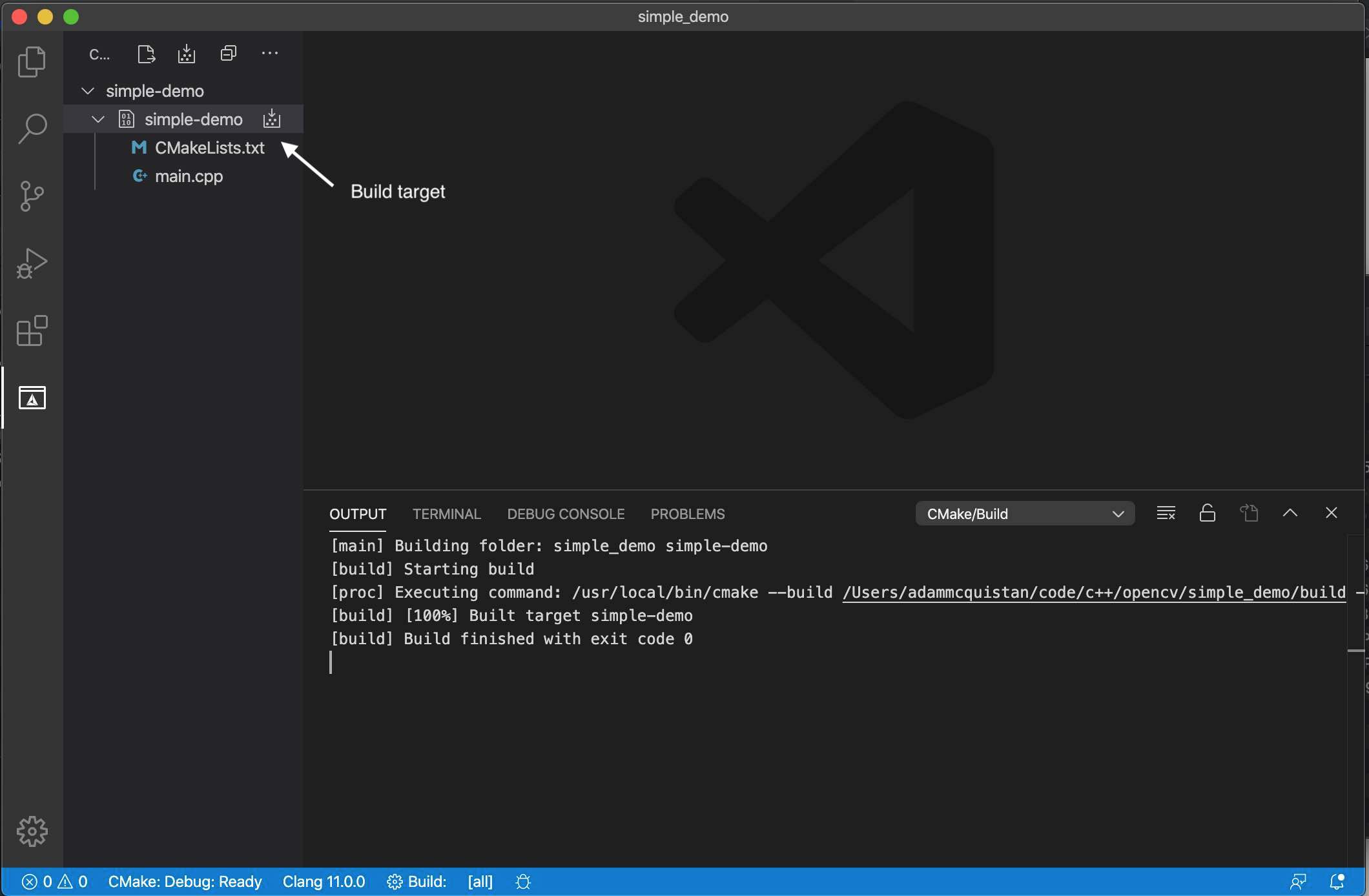 Then in the terminal I issue the same command shown earlier to test the newly built executable in the build directory.

Ok so thats great but, there are two hugely beneficial things that I'm leaving out (i) IntelliSense and (ii) debugging which are both for helping to write and inspect your C++ code. The IntelliSense part is actually ready to go already.

At this point I can open my main.cpp file in the editor and immediately see the amazing IntelliSense as shown below when I hover my mouse over the cv::imread(...) function.

In order to enable the VS Code debugging tools I must create another configuration file within the .vscode directory named launch.json and place the following in it.

This config file says to use the cppdbg debugger, to pass in a path to an image file to display, pause execution at the start of the main() method and to lauch a separate terminal for executing the program.

In order to launch the debugger I click on the Debugger tab then click the debug action button as shown below. 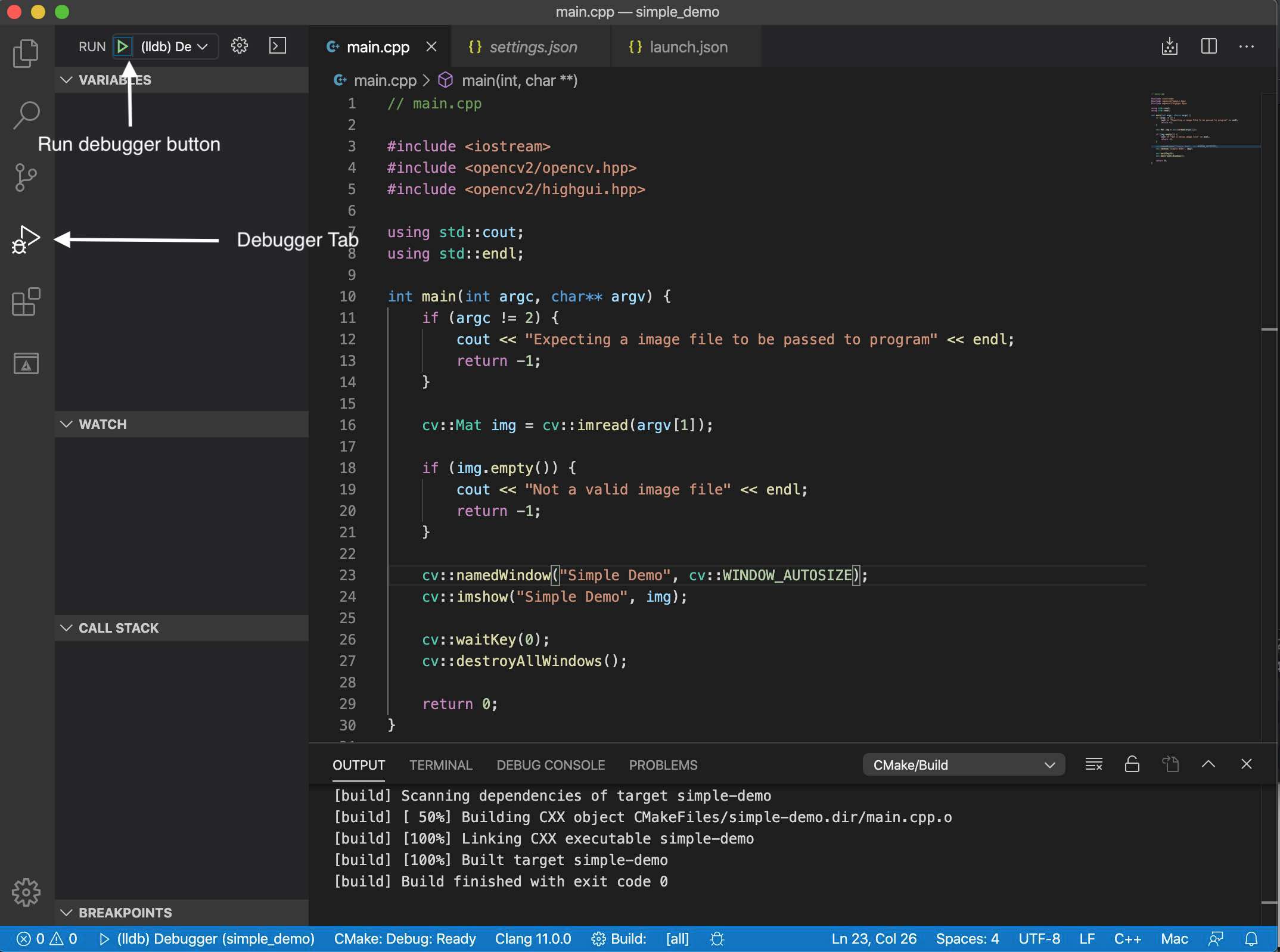 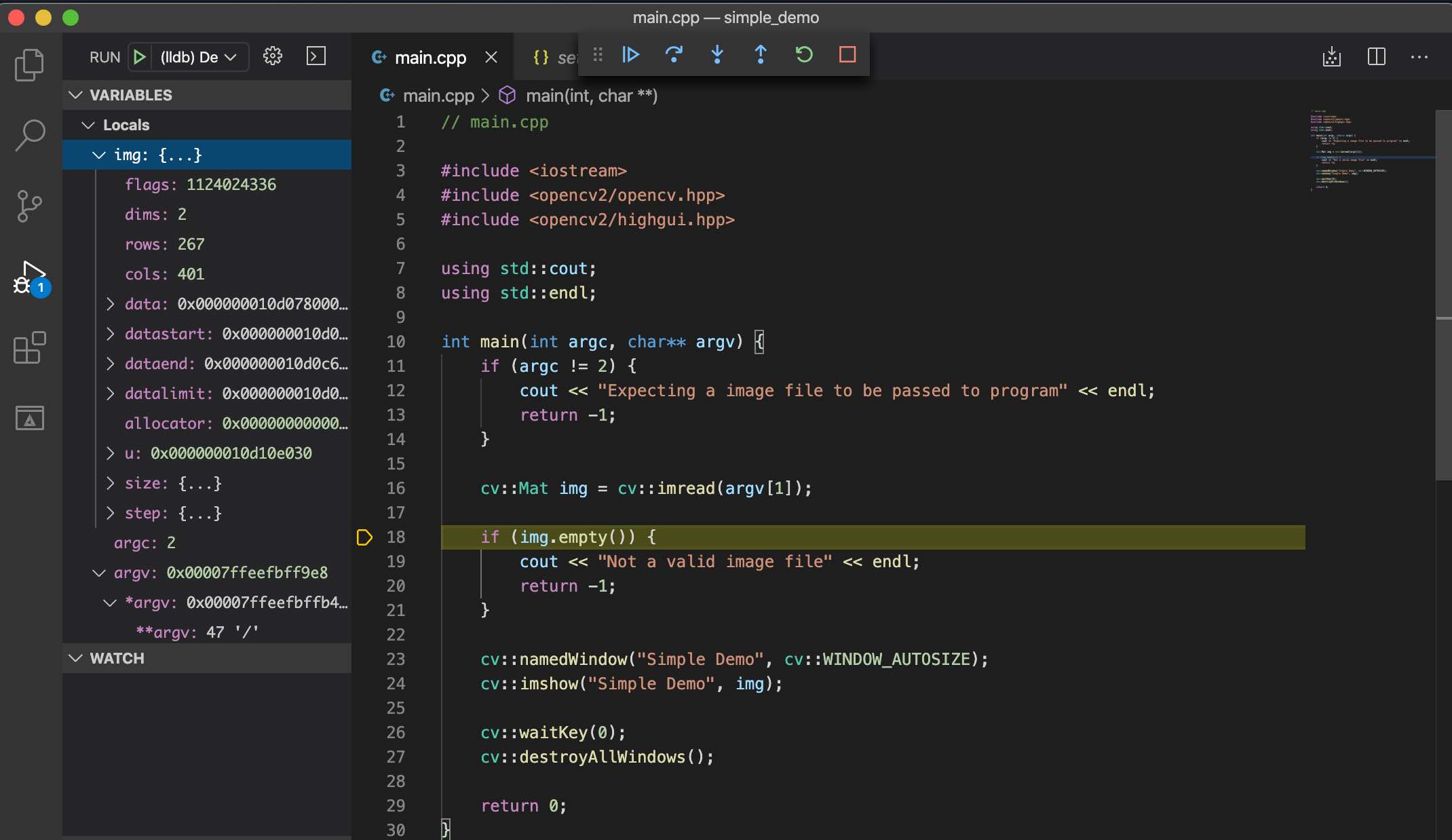 In this article I have demonstrated how to install OpenCV for C++ plus how to utilize VS Code along with CMake Tools and C/C++ IntelliSense extensions for a professional level, high productivity, development environment.

As always, I thank you for reading and please feel free to ask questions or critique in the comments section below.