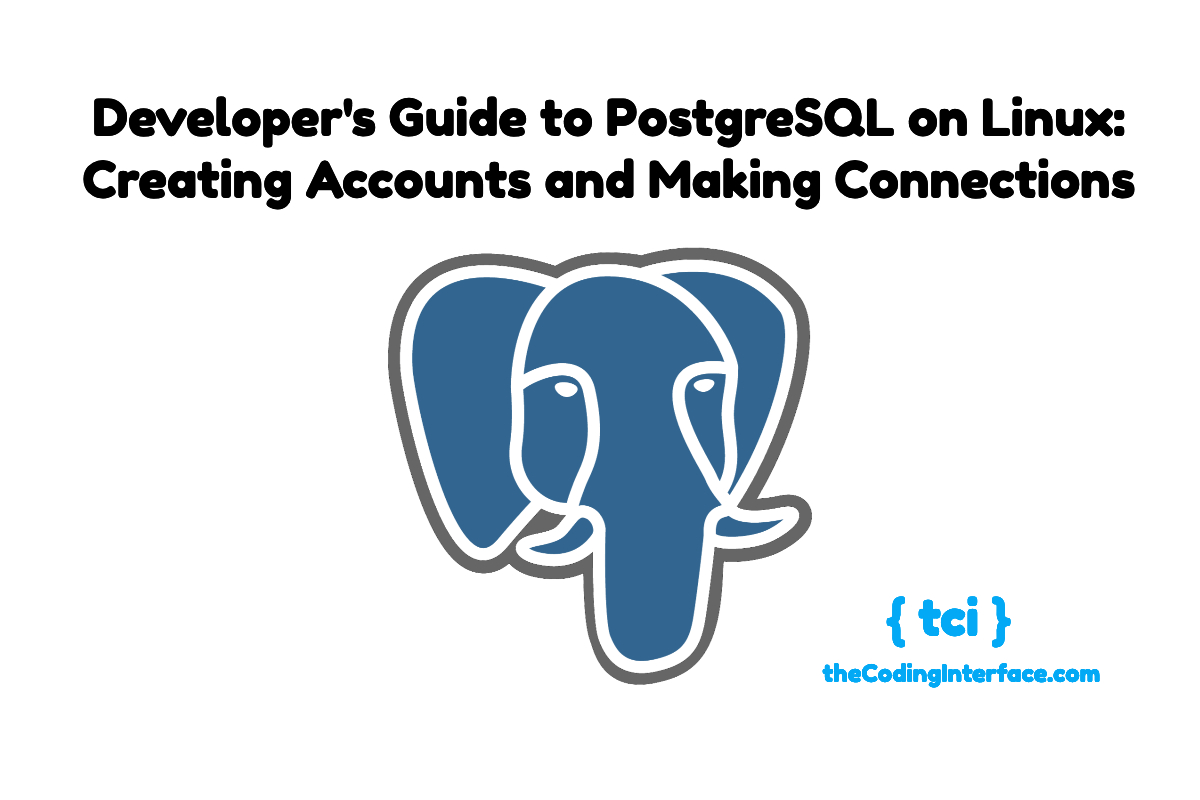 This is the forth article of a series featuring a collection of useful tasks for administering PostgreSQL version 11 on the Linux operating systems Ubuntu 18 LTS as well as CentOS 7. For those unfamiliar, PostgreSQL is a powerful and robust Object Relational Database which is freely available as open source software and widely popular. In this article I cover how to create user accounts and establish connections with these accounts.

User accounts in PostgreSQL are synonymous with the PostgreSQL concept of roles. Think of roles as a set of privileges that are granted to perform various actions.

To create a new user, or user role, you can either use a SQL statement or the createuser utility program. I preferred to use the createuser program, in interactive mode, and with the echo flag set which displays the corresponding SQL statement being sent to the PostgreSQL server.

For example, to create a user account named test using the createuser command interactively in echo mode I use the following.

Note that this command is ran from the regular Linux shell, not the psql interactive shell.

To specify a password to allow for a user to later connect via password authentication you should issue the createuser command with the --pwprompt flag as shown below to create a user role named test2.

For completeness I also show how to alter the test user role by adding a password in SQL.

As I described my earlier article on using the psql interactive shell you can list all available roles by entering the psql shell and issuing the \du command as follows.

You can see that the output from \du shows no privileges have been granted to the test and test2 user roles which matches what I interactively entered in the createuser commands.

If I try to connect to the database cluster with the psql program specifying the test user role it will fail because by default PostgreSQL uses Peer Authentication. Peer Authentication requires connecting from a Linux system account which has a name that matches the PostgreSQL user role and database name. Thus, if I try to connect using the user role named test specifying the -U flag I get the following peer authentication error because their does not yet exist a Linux system account named test.

To add a user on CentOS again requires the adduser command but also needs to be followed with the passwd command to specify its password like so.

Now I can switch to the new Linux user account named test and connect using psql as follows.

If you are just joining in the tutorial series you will need to create a database named test by issuing the following command as the postgres Linux account user.

Often times it is desirable to connect to a database whose name is different from that of the user role that you are connecting from. Lets say I want to be able to connect to the test2 database I created in the last article as the user role named test. I can make this possible by editing the pg_hba.conf file specifying that the user test can make local peer based connections to the test2 database as shown below.

If you are unsure of where the pg_hba.conf file is on either the Ubuntu or CentOS operating systems consult my earlier article on PostgreSQL Installation and Configuration files for help.

In order for the changes in the pg_hba.conf config file to take effect the PostgreSQL service must be reloaded (the below command is for the Ubuntu system, to reload on CentOS use postgresql-10 instead of postgresql in this example).

Another common way to allow access to a PostgreSQL database is via password authentication. To do this you must have a user role that has been created with a password or altered to contain a password. Earlier, I created a role named test2 which I will use to demonstrate this. Its important to understand that by password authentication I am referring to the PostgreSQL role password not the Linux system user account password.

There are two types of password authentication in PostgreSQL: (i) clear, unencrypted, text passwords which should only be used for local connections and (ii) md5 hashed passwords which are preferred especially when connecting from an external client program.

Then after reloading the PostgreSQL service I can connect using the psql client specifying the test2 user and entering the password (note, I can type in the regular plain text password and the psql client will take care of the hashing for me).

Mapping Multiple Users for Peer Authentication to a Database

Sometimes you will want to enable multiple Linux user accounts to connect to a specific database as one common PostgreSQL user role. To accomplish this you will want to create a set of map entries in the pg_ident.conf configuration file that associate the Linux user accounts to one common PostgreSQL user role then specify the name of this map set in the pg_hba.conf file for the main PostgreSQL role and database.

For example, in the creating databases article I created a database named movies. Now I will create a role named movies which will serve as a common user role for a the users joe and jane.

Now over in pg_ident.conf (again check installation article for the location of the PostgreSQL config files for Ubuntu and CentOS) I can create a map set named movieusers mapping joe and jane to the movies user.

Then I place an entry in pg_hba.conf to associate the movieusers map set to the movies role and database like so.

Now if I reload the postgresql service, change users to joe (or jane) and connect to PostgreSQL via psql specifying the movies role as follows.

Resources for Learning More About PostgreSQL

In this article I've covered how to create and configure PostgreSQL user roles which can then be used to connect to databases in the PostgreSQL cluster.